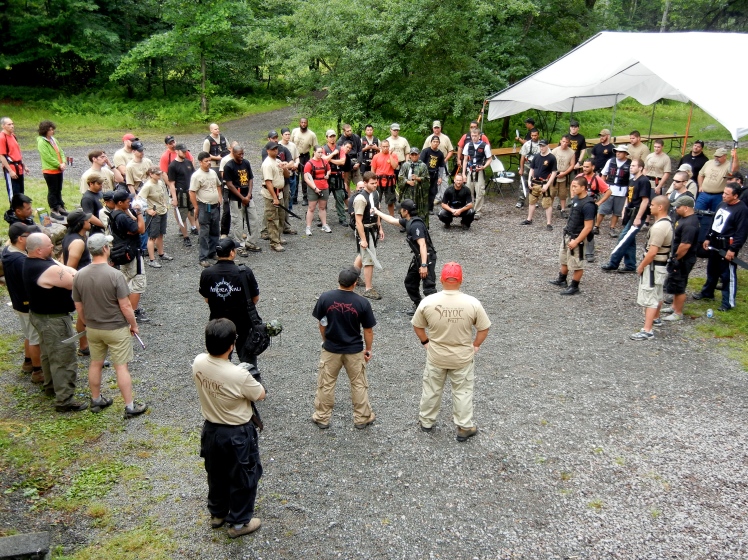 This weekend IEFMA student John Rellias and I attended the Sayoc Kali Sama Sama 2011 in the Pocono Mountains of Pennsylvania. I have been attending the annual gatherings since 2005 but for John this was his first time. Our trip began with early morning flights, as several instructors and students of the Sayoc LA collective and around the country began travelling to the East Coast. Guro Jon Auzenne of Close Combat Martial Arts in Burbank and Guro Steve Feng of Sayoc San Gabriel Valley and I met in Philadelphia and fueled up on authentic cheesesteaks at Pat’s King of Steaks before heading to the mountains. We all finally arrived later in the evening, and some of us were able to visit the event Hidden Agenda instructed by Guro Kevin Estela, on primitive projectiles. It was good to see brothers and meet new friends even that evening, and we were impressed with the scope and depth of instruction being introduced.

Saturday morning was the official start of Sama Sama, beginning with registration and formal salutations. Pamana Tuhon Sayoc and Pamana Silak were in great health and spirits, and the tribe’s instructors, seniors, brothers and sisters were ready and excited to begin training. Pamana Tuhon welcomed us with words of motivation, then organized the ranks into the activities they would be participating in that morning. New participants and new instructor candidates began curriculum and testing, while current instructors began working on advanced material. The various groups demonstrated team dynamics immediately, interacting with each other and collaborating amongst themselves. John began his testing well and was able to observe some of the other curriculum being disseminated. I met with the Medical Team, and we formulated the protocols necessary for the weekend to ensure safety and expedience if necessary. We were privilaged to have the input of Tuhon Tom Kier and other experienced individuals, and developed plans not only for this year’s event but hopefully to be implemented next year and beyond. Pamana Tuhon then assembled everyone to demonstrations given by various instructors and members of the tribe, and through the afternoon we continued to be amazed with world class instruction by our organization’s seniors. Tuhon Felix Cortes taught a session on the Filipino Combatives/Sayoc Fighting System curriculum designed to develop “Combative Mindset”, then senior Associate Instructors Guro Rich Smith and Guro Sue Kittredge discussed roles in the organization, security protocols, and myself and Guro Jon Perrings talked about the Sayoc training rig, and our use of internet based technologies to enhance our organizational growth. We then had our annual stick tournament, and instructors and students from everywhere gave an impressive showing of skill and comraderie. Guro Joe Apostol was our champion, and both he and Guro Tiffanie Meekins were recognized for their successes. Following dinner on our own, we had our first Sayaw and concluded the night with instruction from Tuhon Ricardo Kayanan on long weapon thrusting and non-linears. We ended the night after over 12 hours of amazing instruction and great participation from everyone there.

Sunday morning started with a boot camp workout from Guro Martin Gonzales who ran us through exercises intended to warm us up for the day, and after formal lineup we immediately began our training in Stickgrappling with Tuhon Tom Kier. Tuhon Tom as always gave us incredible material that wowed everyone there and not only introduced new techniques and concepts, but built upon existing curriculum and skill sets. Tuhon Rafael Kayanan then covered Tomahawk applications and tribal concepts and strategies, followed by Tuhon Carl Atienza with bolo curriculum and bolo & short blade (espada y daga) applications. Tuhon Ray Dionaldo then introduced a new blade drill that addressed the continuum of receiver to feeder mentalities. After lunch Full Instructors Guro Harley Elmore, Guro Nick Sacoulas & Guro Dr. Bob Shin covered blade on blade Transition Drill skill sets, loading & team tactics, and reflexive response counters. The weather provided us with temperature and tactile modifiers, but the caliber of instruction that day far outshined anything the environment did. Sunday evening Guro Mike Pana of Bayani Warrior gave an excellent session on stick and dagger techniques before we had our final Sayaw, punctuated with words from Tuhon Richard Sayoc, Tuhon Tom, Guro Harley and Guro Brian Calaustro. Their comments underscored the poignant tone of the evening, and brought a true sense of community and meaning to the whole weekend. The evening finished with shield and weapon instruction from Tuhon Bong, and all of us left exhausted both mentally and physically.

John and I headed back to Philadelphia that night and began our journey home, but since then I have been left with a true sense of unity and family in our Sayoc tribe. This Sama Sama many instructors and practitioners included their spouses and children, sometimes training with them but definitely always around. Pamana Tuhon Sayoc has often reminded us of how important this is, that we have family with us because we do not live our lives without them, and must incorporate their presence in our training through tactics and strategy. They are a constant that should enhance our training rather than hinder it, and allow us to include them as an asset rather than a liability. This is something unique in my own training; never have I had such an intentional and purposeful commitment to all aspects of my life by my teachers, outside of what most think of when they train. Pamana Tuhon just doesn’t allow our families to come, he asks it of us, encourages it and welcomes them as family too. My brothers and seniors in this organization have been there for me in the worst of times as well as the best, and together we have experienced challenges and successes few others would be able to relate to. This is why Sayoc & Atienza Kali instructors teach and train the way we do with our students, and why we are tight in our bonds with each other and in adhering to the protocols of the system. Tuhon Rafael had once said that groups take on the personalities of their leaders, and I am proud to respresent an organization of people that are not only devastating with their technical proficiency, but thoughtful in their approach and meaningful in their words and actions. This weekend connections were made once again, and relationships were strengthened. I am proud to call myself a student of Pamana Tuhon and give my utmost respect to all of my teachers, brothers, sisters and students.