Art, as defined by St. Thomas Aquinas – “the right making of a thing to be made.”

Several years ago at Pamana Tuhon Sayoc‘s house, I had the privilege to see Tuhon Rafael Kayanan‘s tomahawk that he had designed, and that was going to be produced by Master Bladesmith Daniel Winkler.  Knifemaker RJ Martin once told me, a well made knife should feel like it makes you want to cut something, and it has stuck with me ever since.  This weapon did just that.

The ergonomics of any blade design can really give you some insight to what it is for, who designed it and for what purpose.  Some of the best ergo’s on knives are kitchen knives, and for good reason.  Chefs around the world throughout history have contributed to what works and what doesn’t in the kitchen.  They use them hours on end, cutting flesh, bone and cartilage through bloody, hot and slippery conditions.  And while we typically don’t think of combat with these professions, chefs, butchers and fishermen are some of the most proficient people in the world with blades.  This real world input informs the custom designed and fabricated weapons that the Sayoc Global organization, as well as Atienza Kali and blades from Tuhon Ray Dionaldo have produced for decades.  Tuhon Rafael Kayanan, Tuhon Tom Kier, Tuhon Carl Atienza, Tuhon Ray Dionaldo and Guro Harley Elmore are some of the few knifemakers who actually use them.  They make exceptional blades because they are experts in knife fighting. 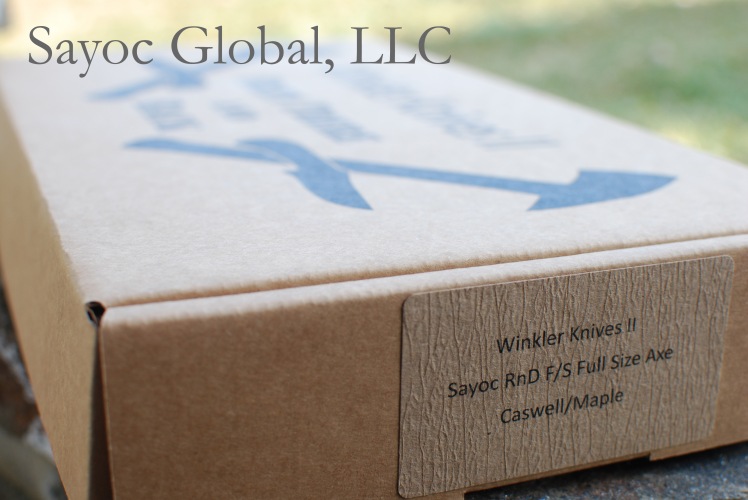 The Sayoc Winkler RnD Tomahawk has, in this full size version three explicit grip positions at the bottom, middle and right under the head that allow secure control and positive tactile recognition of where the hawk is gripped.  While made to fill the palm, the actual shape references firearm grips very familiar to military, law enforcement and practiced firearms users.  The full tang also creates an unbreakable spine that can not only withstand harsh use, but deliver massive impact in various configurations. 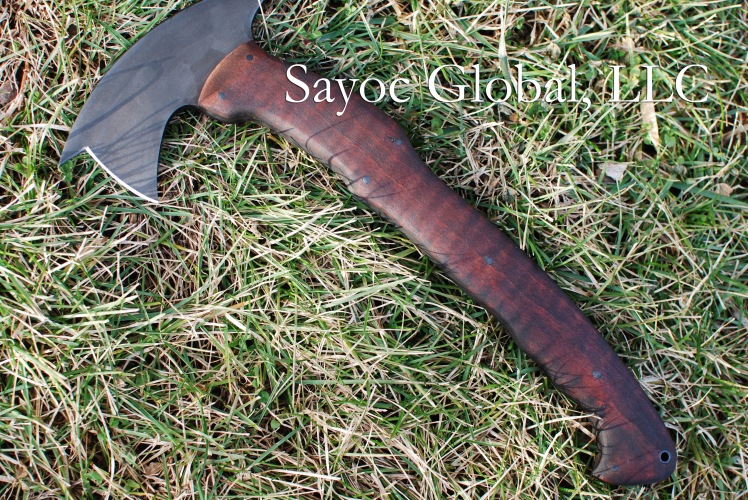 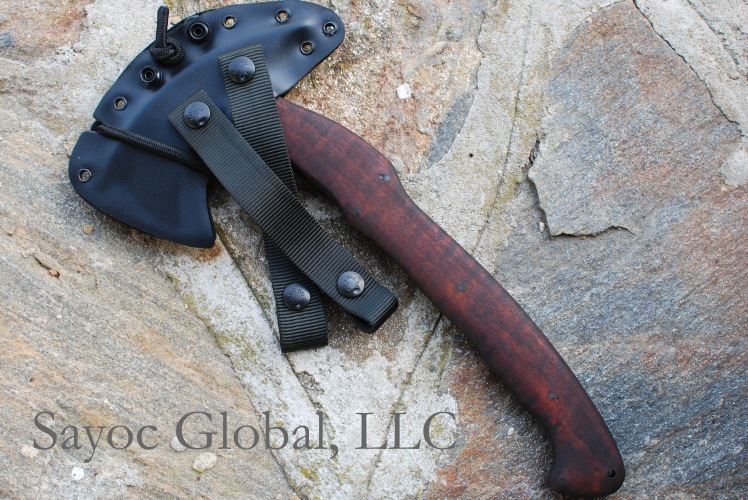 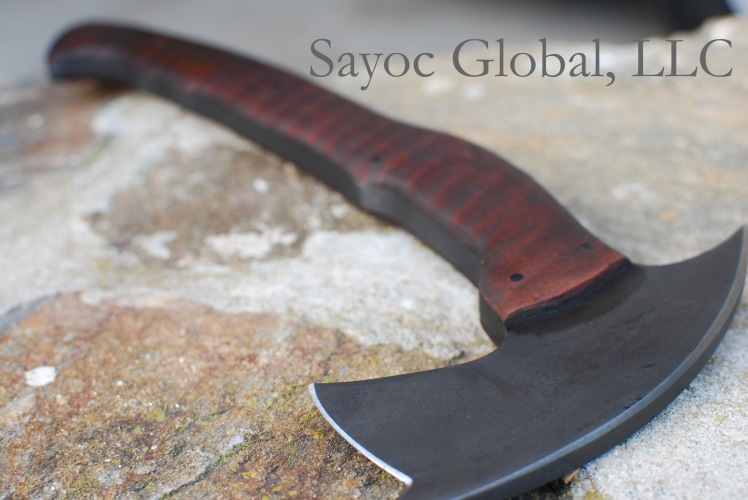 The head of the axe has an acute but unsharped back spike that has obvious penetrating abilities but can also serve a utility function, although make no mistake this instrument was designed and created as a weapon first and foremost.  The front end has a deep bottom hook used to pull and tear, as well as extend the primary cutting edge.  The front spike is one of the most characteristic features of the Sayoc Winkler hawk, intended for piercing insertions when swung.  Recently, this was tested on a Cold Steel Buckler with undoubted results.

There have been several testing videos over the years, and I wish I had archived them on my own hard drive because most of them are no longer online.  They had included demonstrations of the hawk penetrating car hoods, Class III body armor and the like.  Most recently, Tuhon Raf’s creation was featured on The Discovery Channel’s “Lone Target” starring Sayoc and Atienza friend Joel Lambert.

I’m as must of a knife dork as the next guy, and while I love toys from Strider Knives, Emerson Knives and RJ Martin, I can honestly say that the Sayoc Winkler RnD Hawk, along with the blades from Sayoc and Atienza are as beautiful as they are functional works of art.

“Art is nothing else but ‘the right reason about certain works to be made.’ And yet the good of these things depends, not on man’s appetitive faculty being affected in this or that way, but on the goodness of the work done. For a craftsman, as such, is commendable, not for the will with which he does a work, but for the quality of the work.” – St. Thomas Aquinas, Summa Theologica