Tomorrow in Glendale, CA ten Filipino Martial Arts Grandmasters, Masters and Guros will be teaching an all day seminar to raise funds for the victims of Typhoon Haiyan/Yolanda in the Philippines. 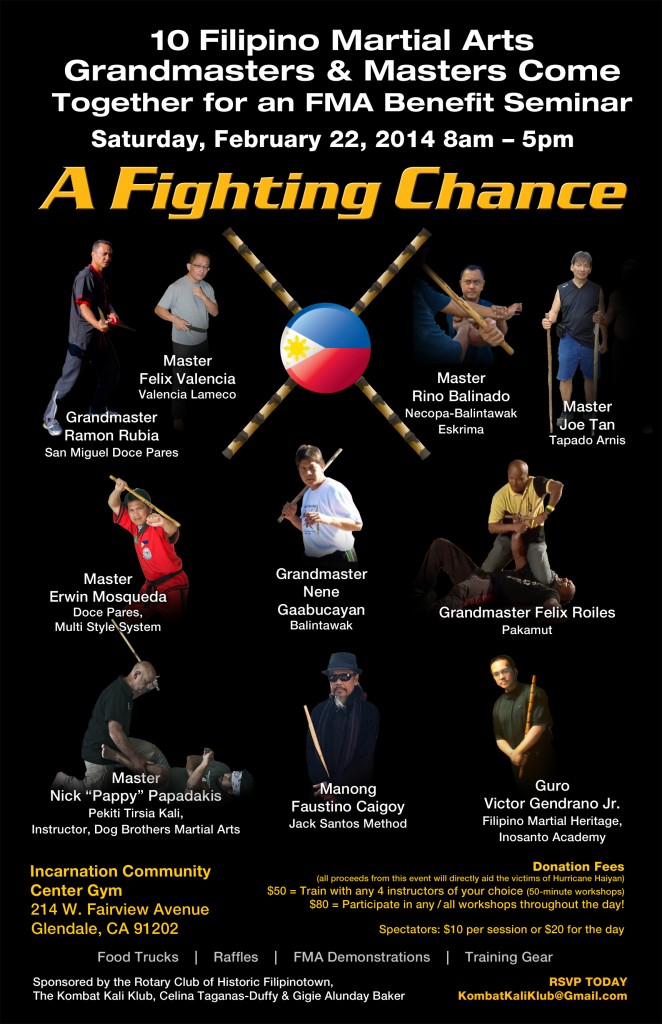 This is a great opportunity to learn or simply see the various systems, styles and individuals propagating the Filipino Martial Arts in Southern California.  Among those participating will be my good friend and senior in the Inosanto system Guro Victor Gendrano, my instructor in San Miguel Eskrima Magtutudlo Ramon Rubio, the first person to show me very heavy long weapon work Master Joe Tan of Tapado Arnis and more.  Kababayan LA, a local television show in Los Angeles has been featuring many of these instructors, so in addition to promoting this event they have also been given the opportunity to demonstrate their skills and styles to a wider audience.

There are so many Filipino Martial Artists teaching in their “backyard” groups, including basements, garages and homes that sometimes it is difficult to find them.  I remind my students that this is not uncommon in the Filipino Martial Arts, because unlike their East Asian counterparts such as Taekwon-Do, Filipino Kali was never structured or designed to teach to the masses.  As Guro Ramon had described to me, it was on a “need to know basis”, wherein fathers would teach their sons, friends would share their techniques with their compadres in town, or members of a tribe would instruct their community in the event of a pending confrontation.

Schools, groups and events like these are invaluable to our FMA community so please support when and where you can.  The MMA gyms, Krav Maga schools and Taekwon-Do studios of the world are awesome, and also deserve support and recognition but the wide open spaces, glossy sheen and crisp uniforms aren’t the only things that define the quality of instruction.  Guro Dan often recalls how his first lesson in Kali was with several masters, on the knife no less.  They were wearing tsinelas (sandals), Hawaiian shirts or sandos (undershirts) and some were even smoking.  Guro says he couldn’t help but wonder, “How can these old men teach me anything?  They don’t even have uniforms!”  As an established Black Belt under Grandmaster Ed Parker in American Kenpo and former “Screaming Eagle” paratrooper of the 101st Airborne, Guro said he was so frustrated that he threw the knife on the ground and stormed away.  His father, angry and embarassed demanded that he go back and show due respect.  And with that as they say, the rest is history.

Support A Fighting Chance, learn about our Filipino Martial Arts and donate to the typhoon victims in the Philippines.